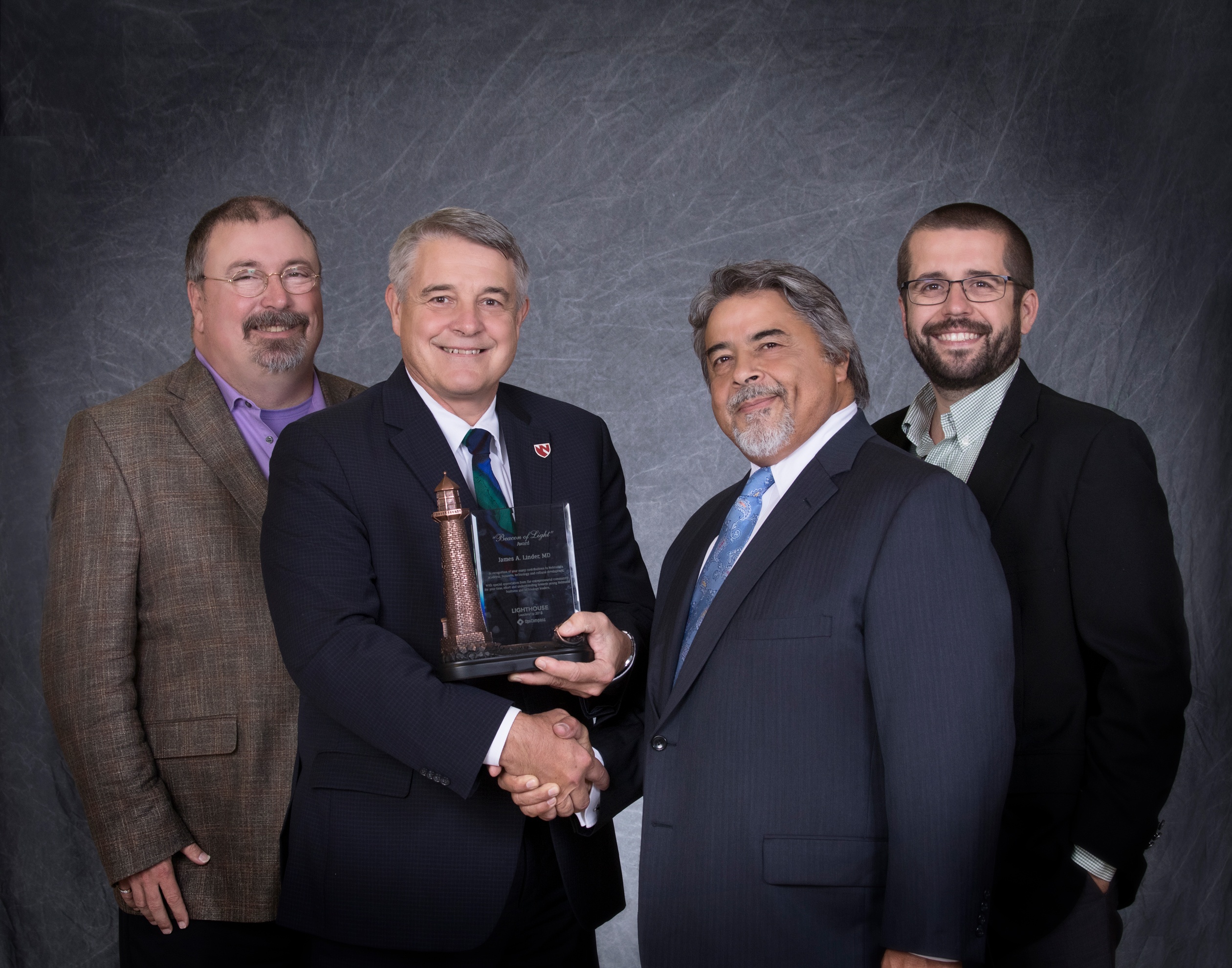 Today the Nebraska CIO Forum recognized the accomplishments of two outstanding contributors to the security and growth of Nebraska business, technology, and public safety. The awards, announced at the annual Lighthouse event sponsored by OpsCompass, were presented at individual ceremonies this month.

“These individuals have demonstrated a selfless commitment to community and provide a very positive representation of the real strength of our society,” stated Raymond Garren, president of the Omaha CIO Forum. He continued, “it is an honor to recognize their service.”

The Lighthouse “Safe Harbor” Award was presented to Byron L. Diamond, current Nebraska Director of Administrative Services where he is responsible for providing centralized support to all state agencies, boards and commissions through 13 separate divisions that make up the agency. Reporting directly to Governor Pete Ricketts, Mr. Diamond was appointed after retiring as Executive Director of Logistics for the Nebraska Military Department, and as a Colonel after 28 years of service in the U.S. Army which included Operation Iraqi Freedom. During his military service he was awarded the Legion of Merit, Bronze Star, Meritorious Service Medal, and numerous Army Commendation Medals.

“Byron has always been there providing the important management of critical resources for protecting the public,” referenced Sean McCary, Sr. Director of the CIO Forum, “from his time in the commercial sector to full-time military service and now at the forefront of public-sector resource management; just someone that quietly, powerfully keeps us safe.”

The Lighthouse “Beacon of Light” Award was presented to Jim Linder, MD, the new CEO of Nebraska Medicine. A practicing pathologist, research expert, patent holder, former president of the University Technology Corporation, Nebraska Applied Research Institute, and Chief Strategist for the University System. He is also founder and investor in several local companies and is involved with the Nebraska Angels organization.

“What most folks do not know is that Jim Linder is one of the kindest, most thoughtful individuals you will ever meet. He is someone who will take the time to listen to and help people at every level of an organization. And he is someone who has specifically helped young entrepreneurs realize their dreams,” added Manny Quevedo, president of OpsCompass.

“The Lighthouse awards are intended to acknowledge the efforts of key individuals who keep Nebraska safe, strong and growing”, commented John Grange, CTO of OpsCompass. OpsCompass sponsors the awards in support of the CIO Forum. He added, “our world has changed, but it does not have to be dystopian, young people need to know that the real super heroes may be the strong quiet leaders that keep us safe and growing every day.”

About the CIO Forum - Created from the Data Processing Managers group.  The Chief Technology leaders from several very large companies identified a need for a group that would meet periodically and discuss their relevant issues with technology, people, and processes.  These leaders created a venue where they can compare their thoughts without the “noise” of vendors.  The Omaha CIO Forum has continued to grow now has over 200 members, of which 75% are CIO’s – with the remainder comprised of CTO’s, VP’s of IT, and high-level directors.

About OpsCompass - OpsCompass, is a SaaS-based provider of enterprise software that drives operational control, visibility, and security in Microsoft Azure and other global cloud platforms. Purpose-built for the cloud, OpsCompass replaces legacy controls that are not designed for contemporary, API-driven, cloud infrastructure. The company was formed by former tech executives that have experience in a variety of cloud related industries and who have lived many of the compliance and security challenges facing large enterprises in the transition to cloud-based systems. http://opscompass.com or http://waypoint.opscompass.com

About Nebraska Medicine - Nebraska Medicine is the most esteemed academic health system in the region, consisting of 809 licensed beds at its two hospitals, more than 1,000 physicians and 40 specialty and primary care clinics in Omaha and surrounding areas.

Nebraska Medicine and its research and education partner, the University of Nebraska Medical Center (UNMC), share the same mission: to lead the world in transforming lives to create a healthy future for all individuals and communities through premier educational programs, innovative research, and extraordinary patient care.